On 12 May the International Congress and Convention Association (ICCA) released the ICCA Statistics Report with country and city rankings for 2019. Warsaw has been ranked on the 1st place in Poland, 20th in Europe and 34th in the world. 71 meetings submitted to ICCA in 2019 gathered a total number of 22,742 participants which is a record result for Warsaw! Poland maintained its strong 19th position with 213 association meetings.

The annual ICCA country and city rankings are one of the most eagerly anticipated reports in the global meetings industry, which can offer some very valuable Marketing and PR opportunities. The statistics however should be analyzed in a broader context and in relation to global and regional trends. 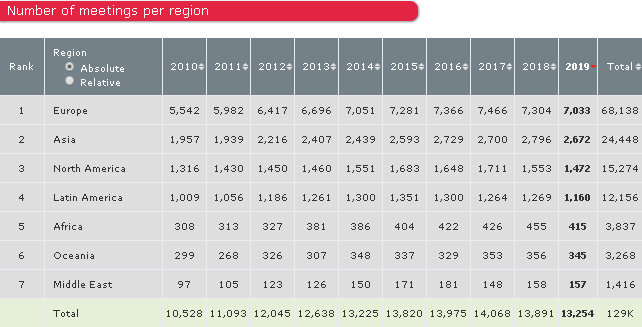 What are the ICCA criteria?

ICCA Statistics Report is based on data on association meetings collected from convention bureaux, conference facilities, hotels and associations themselves. Statistics include meetings organized by associations, as included in the ICCA Association Database, which live up to three strict criteria. They must: be attended by at least 50 participants, be organised on a regular basis (one-time events are not included), move between at least 3 different countries.

The data illustrate some current state, but it should be remembered that this is a result of sales activities undertaken  3-4 years ago, which is usually a period between announcement of bidding process and the event. These decisions are often made upon the internal policies of the associations and the activity of local ambassadors supported by the convention bureaux. 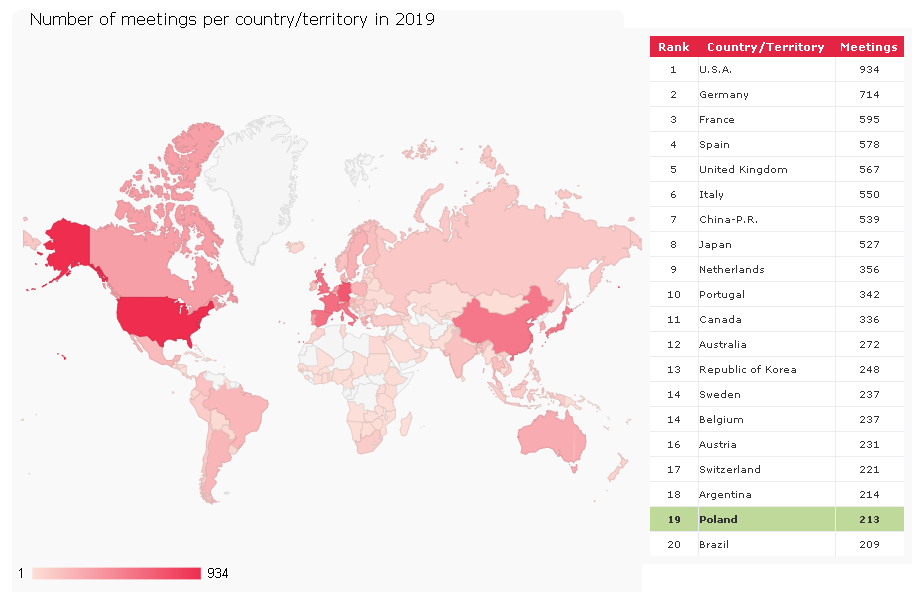 What are the global trends?

Reliable data analysis should not be limited only to presenting results from previous years. The wider context is also important. The ICCA Report is a tool that allows to compare results with other cities and examine general trends.

From the beginning of the ranking, i.e. from the foundation of the International Association of Conferences and Congresses of ICCA in 1963, Europe has been the leader among all regions. Also in 2019, over half of association events (53%) took place in Europe.

In the country ranking the United States is continuously the leader (1.). Next positions were taken by Germany (2.) and France (3.). Poland maintained a fairly strong 19th position, documenting 213 association meetings. In the  city ranking Paris is the leader (1.). Lisbon came second (2.) and Berlin the third (3.). Warsaw has been ranked on the 34. position 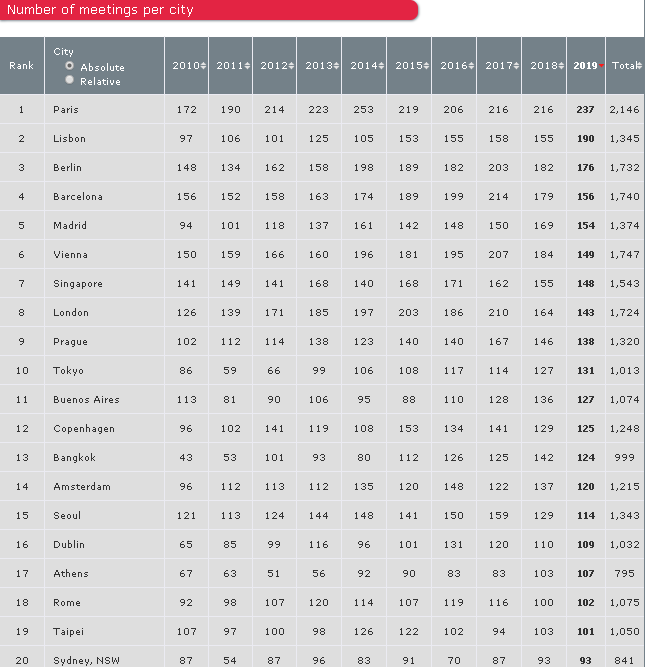 What about the CEE region?

When we compare the results of capitals in the region of Central and Central and Eastern Europe (Warsaw, Budapest, Prague, Vienna and Berlin), it turns out that starting from 2017, all key congress destinations for this part of Europe are experiencing a clear decrease in the number of registered events. This could mean that in recent years interest in the CEE region on the association market has 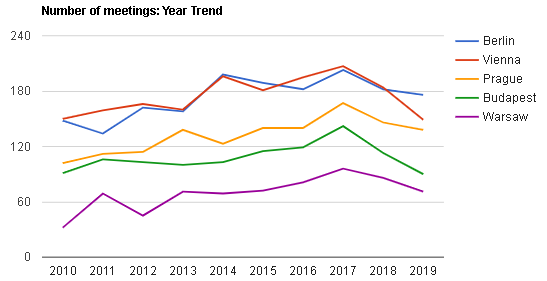 What is the result of Warsaw in comparison to other Polish cities?

For years, Warsaw has been an undisputed  leader in terms of the number of association events in Poland. Also in 2019, the capital took first place in the ranking (71 meetings). Kraków came second (54 meetings). Next positions  were taken by Poznań (21 matches) and Gdańsk (19 meetings).

How should the Warsaw result be interpreted in this year’s ICCA Report?

When comparing statistics from 2019 and 2018, it is clear that Warsaw documented fewer events last year and dropped in the ranking by 5 positions. This coincides with the general downward trend that affected the countries of Central and Central and Eastern Europe, including Berlin, which, despite the drop in the number of events, has been ranked as the 3rd in the world.

It is difficult to indicate the objective factors that determined why Warsaw rankings dropped, but presumably it could be caused by the geopolitical situation, lower interest in the CEE region among international associations and insufficient infrastructure to organize large congresses.

Certainly, the ICCA Ranking results should not be interpreted solely by the number of organized meetings. ICCA provides its members with instruments such as the ICCA Destination Comparison Tool, which allows to compare cities, countries or regions also referring to the following criteria: number of participants, duration of the event, type of facility or congress subject.

It turns out that Warsaw has recorded a success that could have been neglected without careful analysis of published data. In 2019, the total number of association meetings’ attendees was the highest in Warsaw rankings’ history. 71 meetings submitted to ICCA gathered a total of 22,742 participants which is a record result for Warsaw.

The publication of the ICCA Report is an indicator of the effectiveness of sales activities for each congress destination. Country and city rankings reflect the position in relation to other destinations and motivate to undertaking further actions in order to get a better result next year. However, we are dealing with an unprecedented situation. This year will not bring surprising results in the next ICCA Ranking – no promotions or declines. The COVID-19 pandemic situation completely paralyzed the meetings industry, including the association market. Most of the events planned for 2020 are canceled or moved to other dates, which postpones the bidding porcesses of subsequent editions of these meetings.

Regardless of whether next year’s ICCA Report is published or not, one thing is certain – all destinations will be in the same situation. Cities and regions will try to make up for the lost year and compete again for the next events. The rules will be the same for everyone – to convince the meeting owners that they have coped with the epidemic and are ready to safely host congress participants.